Blue Latitudes, Boldly Going Where Captain Cook Has Gone Before 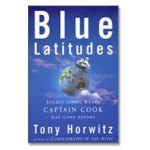 When Horwitz began the journey of retracing Captain James Cook’s travels, he and his humorous, hard-drinking, side-kick, Roger, performed a respectfully friendly, but ludicrous re-enactment of the 1760 British landing in Tahiti. At a beach with frolicking children and topless women they were dressed in make-do period clothing, and wore white wigs while they read seagoing rules of etiquette from the Earl of Morton’s “Hints” prepared by the British Royal Society.  The original sailors were not to be petulant, nor settle among the natives without their consent, and they were to restrain from the wanton use of firearms. So much for decorum and hints.

Blue Latitudes is not a history book though it is generously laced with historical fact. Instead, it is a tale of repeating the route over two hundred years after the fact, while trying to appreciate and measure history’s impact. Much of it is humorous, in part because it is the least sad way of understanding how Australia’s Aborigines first thought the sailors were overgrown babies, or that historical plaques in New Zealand tell how the English and Maori “learned about each other,” while neglecting to use the words spears and gunfire. What humor can be enjoyed from vignettes is bolstered by Roger’s pithy comments, and descriptions of projectile vomiting and food horrors of modern day history re-enactors who have paid thousands to spend days aboard ships that follow Cook’s travels through the northern waters of the Bering Sea.

Horwitz visited Cook’s boyhood neighborhoods in London and tried to make sense of the man who was meticulous with his captain’s log and extremely reticent to reveal himself. Throughout his travels he questions residents about Cook’s legacy and works to connect that with history’s footprint and the little that is known of the man with a lower class British background. Horwitz speculated, like other historians have done, though his hand seems to favor a more generous view of Cook’s temperament and attempts at peacekeeping. Centuries later the explorations of Europeans is recognized as the beginning of disastrous consequences for indigenous people the world over. That alone is not arguable, but it is also not arguable that the connection of the world’s people was inevitable. Blue Latitudes has a few mournful stories about what was lost to people when they were visited by the Europeans, and simultaneously recasts the light on present day people and everyone’s responsibility to mend the bridges and accept one another.