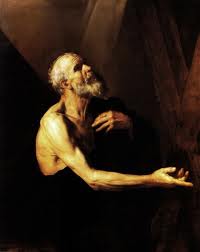 Last night on Facebook a woman I know wrote “My God is a loving, supporting God and has. . .” and ended with “Find your own God and you will find peace.”

I’ve heard that sentiment a thousand times. What does it mean? I do understand the English language and think the person is saying she believes in God, God is loving and supporting, and if the reader will believe in God he/she will find peace.

But that’s not what was written.

Instead the concept of God is being claimed as personal and exclusive. When I say “My husband is a loving supporting guy, and if you had a husband you would find peace,” what I mean is he’s mine, I’m not sharing, and go find your own among the masses of men.

This perception of what I hear is one of the reasons (among others) I’ve never been able to blend into religious groups. 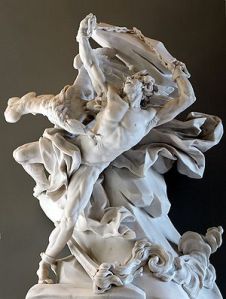 The Prometheus by Niclas-Sebastian Adam

My mother did say a word or two about God when I was young enough to believe everything she said. One sentence she repeated several times was, “God loves everyone.” When I was six years old Mother was the one mother I could comprehend, and she was the source of my daily physical and mental comfort, so I listened when she said such things.

I incorporated her statement to mean the one and only God, who I was to believe in, loved everyone, which I took to mean Mother, me, my kindergarten teacher and the boys next door who entertained themselves by skinning live snakes. My small mind has held that nugget of mother dictum as steadfastly as she taught me to appreciate well-prepared food.

Did I hit upon something when I wrote two paragraphs back, 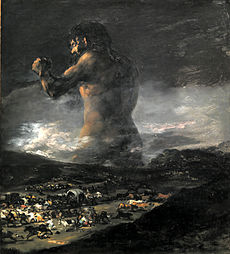 “the one mother,” and above that “My mother”? She of course is my mother, not yours,  and you have your own mother whether you know her or not. So, does everyone believe there are many Gods? Like many husbands? Have I missed knowing this by missing church all these years? Is that the secret belief one gets baptized to hear?

This entry was posted in Not the Grocery List, The Street View and tagged God, Many Gods, My God, One God, Rebecca Guevara, Religious Belief. Bookmark the permalink.