I don’t know why this unhappy face was in a pillar in a beautiful hotel lobby in Cabo San Lucas, Mexico. Perhaps Mexico understanding combined beauty and death better than we do?

Mr. Devlin was 42. He left a short note in his car, telling his wife, Kristina Devlin, 41, to go on and live her life. He said he would watch over their daughter, Ludivine, 4, and their son, Cole, 3, and apologized to his family.

I doubt I need to tell you Mr. Devlin took his own life. The quote was from an article by Liz Robbins last Sunday in The New York Times which outlined Colin Devlin’s high profile restaurants, current financial problems, and circle of devastated family and friends.

Suicide is common and in the papers everyday. There’s no way to avoid these headlines that always send a wave of sadness through my heart for the hopelessness that was felt by another human being. Through the years since my brother’s own chosen death, I’ve acquired a protective, easily-permeated shield of black humor for protection. So please understand the following is half serious, half knowingly ridiculous, half just trying to understand. 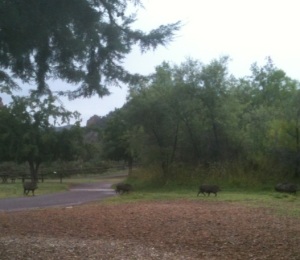 I’ll bet the javelinas we saw on a recent Arizona vacation don’t worry about being sorry.

laughable than any other suicide’s last words. They are boilerplate. “Live your life, I’ll watch over you, I’m sorry.”

Most people have a personal theory about what happens to suicides in the afterlife. Here’s a few possible scenarios that have entertained me. A few I’ve given more serious, thoughtful consideration, and a few give me comedy relief because even thirty years down the road, I still need it.

Scenario #1 – Suicides have to abide by the terms of that damn suicide note.

I’ll bet that “I’ll watch over you,” comment gets pretty hard to witness. Seeing the sadness and anger that has already started may be a bit gratifying in the beginning, but the guilt and long term personality changes directly attributable to the death is bound to get a little wearing when the deceased was purposely trying to leave problems behind.

Spiritualists are constantly yammering things like, “I am receiving a message that your serial-killer son was sent to teach you a lesson.” What circumstances of horror are we setting ourselves up for in the “next life”? Is Mr. Devlin someday giving birth to a future serial killer?

A twist on this is the “you reap what you sow” so maybe next time he’ll be Mrs. Devlin who needs to explain the unexplainable to two innocent children who too easily can grow up falsely believing they weren’t worth their dad’s time. But don’t worry all you Mr. Devlins out there, you’ll get a few hints you can improve upon by watching the mother of your children. 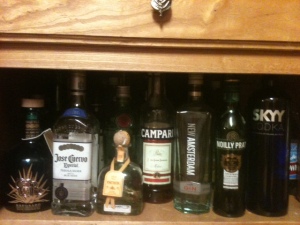 Many people turn to this cabinet in grief.

Scenario #3 – The “I’ll up the ante one poker chip” hereafter game.

This extension of Scenario #2 is based on observation of my own little life that appears shackled by the rule of: Nothing gets better until I fix it, learn it, change it, or improve it. In other words, I’ve never had a problem or issue that was made better by dropping all responsibility for it. Closer observation shows when I have done that it later returns with an angrier or sadder face and always costs more. I have a sneaking suspicion that’s a rule of life. Maybe it is of afterlife, too.

Scenario #4 – The It Doesn’t Matter School of Nihilism

On the other side of the pearly gates there is a clubhouse named Freedom Road. It’s motto is, “We understand you.” Everyone goes to one of three chapters named, “I Did It My Way,” “I Did It Their Way,” or “What Did I Do?”

This conversation passes daily at the welcoming cocktail party of “I Did It My Way”. “Those useless humans. Why can’t they understand it doesn’t matter? They’re wasting their time feeling bad about me. I’m in seventh heaven! 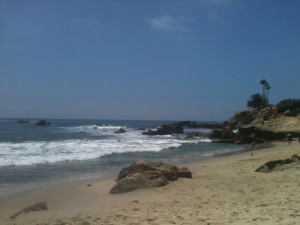 I find nature very healing. This is Laguna Beach, California.

They’ve got their own lives to live and manage. Why don’t they leave me alone?”

Who can say (or convince the rest of us) what happens after that cocktail party? I don’t know, but my belief has to do with learning awareness, love and forgiveness.