Utah to Arizona #19, What Friends Are In Front of Me Now?

Posted on February 21, 2014 by The Writing Waters Blog

A gift from friends.

Yesterday and the last two nights have been spent mentally and physically resting. It was not time planned for but it was time demanded from Irma (sometimes secretly called Fizzlehead) Prattle and my healthy though slowing body. It was necessary time in the De-acceleration Chamber between lives.

I think I can be called an Arizonan now. I have had houseguests and officially opened Beckie’s Bed and Breakfast for Friends. It was wonderful. Well there was a glitch but Dear Husband offered his own solution. To escape a weekend with descending females he retreated to an Artist Retreat Weekend in greater Phoenix that included art shows for his enjoyment and research for his work and art films in the evening. 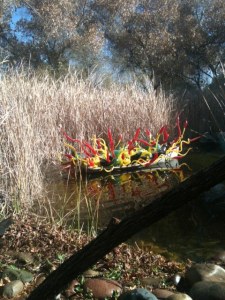 A Chiluly glass sculpture in the Desert Botanical Gardens.

http://mariscosplayahermosa.com; and the Renaissance Festival, http://www.royalfaires.com/arizona/. Four hundred seventy miles were put on the trusty car. It was all wonderful.

And did I mention we ate and talked and watched the Olympics and had a drink or two? Then they left and the house was a silent, empty wine cellar with dirty sheets. And I was lonely.

Not once did I think to check on the happenings of another life. My newly formed Blog Life lay abandoned as a half-completed manuscript in the blogosphere. Irma asked me if I felt neglectful of a loved one with a face only a mother could love or free at last. Dear Husband asked if he could come home now.

Why yes, of course he could because during those three days I’d gotten a call from a friend and her husband who were traveling through and wanted to come by. Before they got here sheets were cleaned, food and drink were restocked, and the dishwasher was cleared.

They have been traveling and sleeping in their van for the past several weeks. That van has been to Alaska, Key West and eastern Canada in its 250,000 miles. My intrepid traveling friends have hiked Australia, South America, Mexico, Canada, all over the U.S., and Europe. Later this year they are traveling to China, unaccompanied.

It appears I am a Whose-In-Front-of-Me-Friend. I’m happy to be that. It means I get both, and I appreciate how different everyone is and how much I have been able to enjoy having such wonderful people in my life. Both real humans and all of you out there in the blogosphere who claim to be humans, too.

This entry was posted in Arizona, Not the Grocery List, Utah to Arizona for a Next Life and tagged Arizona, Arizona Biltmore, Blogosphere, Friendship, Moving to Arizona, Rebecca Guevara, Taleisin West, VSNA Book Sale. Bookmark the permalink.

11 Responses to Utah to Arizona #19, What Friends Are In Front of Me Now?